Daniel Dodd "Dan" Wilson (born May 20, 1961) is a Grammy Award–winning singer, songwriter, musician, producer, and visual artist. He is known as the leader of the band Semisonic, for which he wrote the Grammy-nominated "Closing Time" and the international hit "Secret Smile." Wilson has also released several solo recordings, including the 2014 release Love Without Fear. He was also a member of the Minneapolis psychedelic rock band Trip Shakespeare.[1]

Wilson is also an acclaimed co-writer and producer that have earned him two Grammy Awards.[2] His first was the 2007 Song of the Year Grammy for "Not Ready to Make Nice," one of the six songs he co-wrote with the Dixie Chicks for their Album of the Yearwinning Taking the Long Way. Wilson also shared in the 2012 Grammy for Album of the year for his work as a producer of the hit "Someone Like You," one of the three songs he co-wrote with Adele for her album 21.

Wilson attended Harvard University, where he studied visual arts with a focus on printmaking[3] and from which he graduated B.A. summa cum laude in Visual and Environmental Studies in 1983,[4] while he resided in Dunster House. Wilson is an accomplished artist, and has won the Louis Sudler Prize for Outstanding Artistic Talent and Achievement in 1983.[5] While at university, he began collaborating with his brother, singer-songwriter Matt Wilson, who also attended Harvard College. The Wilson brothers played in two bands, Animal Dance and the Love Monster. After college, Wilson pursued his interest in drawing and painting, first in San Francisco and then in Minneapolis.

In 1987, Wilson joined the Minneapolis psychedelic band, Trip Shakespeare, which Matt Wilson had founded with bassist John Munson and drummer Elaine Harris. The original three members had already released one record, and now as a quartet, with Wilson on guitar, piano, sharing lead vocal duties with Matt Wilson—with whom Wilson also co-wrote many of the songs—and Munson, the band released three more albums (Are You Shakespearienced?, 1988, Gark Records; Across the Universe, 1990, A&M Records; Lulu, 1991, A&M Records) and one EP (Volt, 1992, Twin Tone).

Since Trip Shakespeare's breakup in 1992, Wilson has continued to collaborate with his brother, including the release of two live albums (Minneapolis 2010 and Minneapolis 2013). 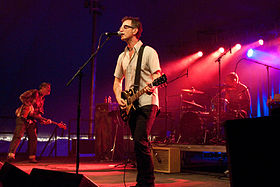 After Trip Shakespeare's breakup in 1992, Wilson and Munson joined with drummer Jacob Slichter to form Pleasure, a trio that was later renamed Semisonic. Semisonic released one EP, three full-length albums, and one live album.

The band's first album, Great Divide, received critical acclaim. David Fricke wrote in a year-end Rolling Stone article on the notable albums of 1996, "Great Divide is that rare '96 beast, a record of simple but sparkling modern pop, rattling with power-trio vitality." It was their 1998 release, Feeling Strangely Fine, however, that brought the band to widespread national and then international attention and success. Powered by Wilson's songs "Closing Time," which was a number-one hit on the Modern Rock charts for thirteen weeks in the spring and summer of 1998, the follow-up single "Singing in My Sleep," and "Secret Smile," a breakthrough hit for the band internationally, Feeling Strangely Fine attained platinum sales status in the U.S. and U.K. "Closing Time" received a 1999 Grammy nomination for Best Rock Song[6] and has become an enduring pop-culture reference point for the late 1990s. It was a focal point of the plot and soundtrack of the 2011 film Friends with Benefits.

Semisonic's third album, All About Chemistry, was released in 2001, and featured Wilson's song "Chemistry," the album's first single, and also included "One True Love," a song Wilson co-wrote with Carole King.

Semisonic stopped touring in August 2001 but continue to perform on occasion. Slichter's memoir, So You Wanna Be a Rock & Roll Star, provides a detailed account of the band's adventures and misadventures in the music business.

As a solo artist[edit]

Free Life helped establish Wilson's reputation as a songwriter, with The A.V. Club writing, "the star of the show here is Wilson's remarkable instinct for creating gorgeous songs, and his unabashed, obvious joy in doing so. For anyone worried that songcraft is an endangered species, Free Life should ease those fears."[7]

Wilson's second solo album, Love Without Fear, was released on April 15, 2014 and includes performances by Sara Bareilles, Missy Higgins, Lissie, Natalie Maines, Blake Mills,Sara Watkins, and Sean Watkins. The first recording from Love Without Fear, "Disappearing" (with a cover of Neil Young's "Out on the Weekend" included as a b-side) was released on November 7, 2013 and was the debut release of the new singles label, Canvasclub.

In describing the album, Wilson said, "The songs are about being left alone, not wanting to lose someone, about desperately wishing for connection and togetherness. The sound of the record lives at the intersection of Americana and Beatles– influenced rock and roll. A little bit of twang and a lot of cinematic emotion."[8] The album received largely favourable reviews emphasizing Wilson's reputation as a songwriter.[9][10][11][12] “Dan Wilson’s career is proof positive that smart, elegant songwriting has a place in music… [Love Without Fear] is a lovely amalgamation of chamber rock, gentle country, gooey '70s pop and snappy soul."[13]

Words and Music by Dan Wilson[edit]

Wilson’s discoveries as a solo artist and collaborator with other artists are the subject of “Words and Music by Dan Wilson,” solo concerts in which he performs some of his songs and describes the songs’ various inspirations or the insights that occasioned their composition. “Words and Music by Dan Wilson” has come to Hotel Cafe, Room 5 and Largo in Los Angeles, Joe's Pub in New York, World Cafe Live in Philadelphia, Jammin' Java in DC, Rams Head in Annapolis, The Cedar Cultural Center in Minneapolis, Schubas Tavern in Chicago, and the Red Barn concert series in Northfield, MN. Wilson has also presented Words & Music workshops at the 2012 ASCAP expo, UCLA's Herb Alpert School of Music, and USC's Thornton School of Music.[14]

Wilson’s thoughts about songwriting and advice to young songwriters are also captured in his Vines series, Words & Music in Six Seconds. They were described as "In his short videos, Wilson provides insightful quips about common songwriting insecurities, methodology, personal writing quirks, and various other tips for writing your best."[15]

As a songwriter and producer

As a songwriter and producer, Wilson has collaborated with a number of artists. Two of these collaborations have earned him Grammy Awards.

A number of artists have described Wilson's ability to help put their feelings and ideas into song. Speaking of her experience of working with him, Pink said, in an online interview, "He is brilliant, and he's a thoughtful songwriter. And he's a song crafter . . . like old-school. He crafts songs and he thinks about them. And I learned a lot from working with him.”

Wilson co-wrote six of the songs on the Dixie Chicks multiple-Grammy-winning album Taking the Long Way, including the title song and "Not Ready to Make Nice," which earned Wilson and the Dixie Chicks the 2007 Grammy for Song of the Year. In the 2006 film Dixie Chicks: Shut Up and Sing, Wilson speaks on camera about his experience as a co-writer on this album, especially in regard to helping the Dixie Chicks make an artistic response to their rejection by radio and a large swath of their fans in the wake of the band's statements about President Bush and the Iraq War.

One of the songs he co-wrote for this album, "Easy Silence," appears on Free Life, with Dixie Chicks singer Natalie Maines singing harmonies.

Wilson co-wrote three of the songs on Adele's multiple-Grammy-winning 21, "Don't You Remember," “One and Only," and, most notably, "Someone Like You," which became a number one hit in the US, UK, Ireland, Australia, and New Zealand was a top ten hit around the globe. As a producer of this track, on which he also played piano, Wilson shared in the 2012 Grammy Award for Album of the Year.

In an interview with American Songwriter, Wilson recounted the writing and recording of "Someone Like You":

The recording on the album was intended as a demo. I was thinking, "Oh, they're going to make a big version of this, strings and angelic choirs, like a big Chrissie Hynde power-ballad." But by the end of the first day, the demo was sounding lovely, and very affecting, but it was only half-written, there were no words on the second verse or the bridge as I remember. Adele came to the studio the next day and said, "I played it for my manager and me Mum." I was a little nervous about this because I don't like people to hear works-in-progress. I asked her what they thought of the song. "My manager loves it and me Mum cried.”

“Someone Like You" won the 2012 Grammy for Best Pop Solo Performance, and as she accepted the award, Adele said, "I want to thank Dan Wilson, who wrote this song with me. My life changed when I wrote this song and I felt it before anyone even heard it.”

"Someone Like You" was the most downloaded single of all time in the UK[16] and was voted third most favourite single of the last 60 years in the UK.[17]

As a visual artist[edit]

Wilson's career as a painter, illustrator, and calligrapher is less widely known, but his artwork has often intersected with his music career. He was represented by Thomas Barry Fine Arts in Minneapolis, and his works are included in numerous private and corporate collections.

Wilson's paintings are featured on the artwork for two of Trip Shakespeare's albums, Are You Shakespearienced? and Lulu, as well as on the cover of his first solo album, Free Life.

Wilson created all of the artwork for his 2014 album Love Without Fear. Most notably, a hand illustrated 24-page hardcover Deluxe Album Book/CD. The package includes Wilson's own calligraphy, sketches, and handwritten lyrics for each song on the album. The official lyric videos for his singles from the album, “Disappearing” and "A Song Can Be About Anything" are also made entirely from his own illustrations.

At his "Words and Music by Dan Wilson" shows, audience members receive illuminated set lists that are hand illustrated by Wilson. One of these set lists was featured on NPR's blog All Songs Considered.

Wilson's calligraphy and illustrations are featured in his Tumblr series, “DW’s Sketchbook” and his musical cartoons have been featured in the Wall Street Journal's Speakeasy Blog.[18]

Wilson is married to Diane Espaldon, the daughter of the late Dr. Ernesto Espaldon and anesthetist Dr. Leticia Espaldon and sister to James Espaldon, a Filipino–Guamanianpolitician, lawyer and member of the Republican Party of Guam.[2] Wilson and his wife were contemporaries at Harvard College, where he studied visual arts and she studied government.[4] Wilson's wife subsequently earned a M.A. from School of International and Public Affairs, Columbia University. Together, they have one biological daughter, Corazon ("Coco") (b. 1997), who was born prematurely and has cognitive disabilities and for whom "Closing Time" was written,[19][20] and Lily (b. 2007), who was adopted at age 2 from the Philippines.